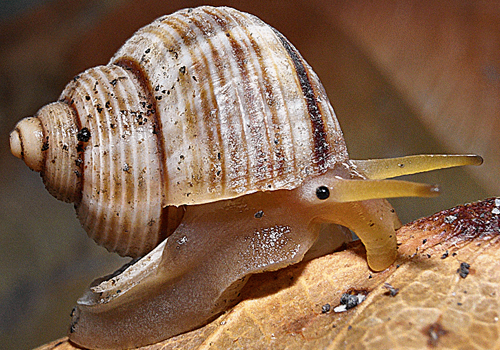 The oldest division in the KwaZulu-Natal Museum is devoted to malacology - the study of animals belonging to the phylum Mollusca. Molluscs are soft-bodied creatures such as sea shells, land snails, slugs, squids and octopuses. In terms of the number of species, they are the second largest group of animals in the world, and the largest in the sea. South Africa is estimated to be home to a total of between four and five thousand different species of molluscs.

From the first shells presented in 1879, the department has grown over the years to house the largest collection in Africa and the fifteenth largest in the world; the type collection alone consists of over 3000 specimens. Although no "official ranking" has been awarded, it has become the de facto "National Collection of Molluscs".

This collection originally came into being due to the enthusiasm and dedication of an amateur collector of molluscs and books, Henry Burnup. He became an honorary curator of the mollusc collection till his death in 1928. The collection comprises mostly marine and terrestrial species, with a small holding of freshwater molluscs.

The collection has steadily grown over time through donations, purchases, exchanges and more recently through extensive fieldwork programmes. In addition, in 1978 and 1980 the important mollusc collections of the Transvaal Museum and Albany Museum respectively were acquired by the Natal Museum. This greatly enhanced the historical importance of the collection. Other important collections namely those of Rodney Wood (Seychelles specimens) and Kurt Grosch (Northern Mozambique) were added as well, together with the largely South African collection of Clarice Connolly.

The marine section was substantially augmented by the museum’s dredging programme that was started by Dr. R. Kilburn and took place between 1981 and 1997. He was joined in 1984 by Dr. D. Herbert. These annual trips consisted of 10 day cruises during which time dredging would take place at selected areas on the continental shelf and upper slope off the South African coast. In this way nearly 1100 stations were sampled resulting in an enrichment of the Natal Museum mollusc collection, These samples include many rare and unusual species, often new records for the region or the first ever to be taken alive, and a very large proportion that are new to science.

Land snails were of special interest to Henry Burnup and his collection forms the basis of a reference resource, including many types. There was a period of minimal growth in this section after his death, but when Dolf van Bruggen was curator in the 1960s growth resumed. Subsequently, in the mid 1990s land snail research was again renewed due to the interest of Dr. D. Herbert which resulted in the continued growth of the collection until his retirement in 2017. Dr. I. Muratov is now carrying on with land snail research and collection updates.

The mollusc collection consists predominantly of dry shells, but wherever possible there are also examples of each species, preserved in ethanol for anatomical examination. Our collection is utilized by researchers worldwide by borrowing material and more recently by studying the DNA of tissue samples, which are now routinely taken from any live taken specimens that have been collected. Countries which have borrowed our material include America (North and South), Australia, Mauritius, Germany and New Zealand. Linda Davis  oversees the loans database and the issuing, preparation and postage of the material going on loan. There is an increasing number of requests for photographs of types, and over 200 types were photographed as a result of these requests in the last 10 years. The revision of the molluscan types deposited in NMSA is ongoing, with Scaphopoda, Cephalopoda and Polyplacophora being published in African Invertebrates