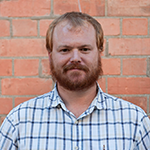 I am the Assistant Director: Natural Science, but I have a background in entomology, making my departmental research slightly skewed. After completing my PhD I was HOD of Entomology and Arachnology at the Albany Museum, before moving to the KwaZulu-Natal Museum in 2017. As well as overseeing the functioning of the department, I am involved in several research projects, both with local and international collaborators.

I have an interest in juvenile insects, working on both cicada nymph taxonomy and forensically important beetles with Prof Martin Villet at Rhodes University.

I have also joined up with the international PINDIP project, working on pollinating flies in South Africa, particularly in the eastern region (Eastern Cape and KwaZulu-Natal provinces). The project focusses on making data available for decision makers (conservation organisations, politicians etc.) and our complimentary research involves hoverflies in the genera Syritta and Eristalinus.