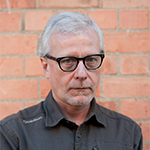 For the last twenty years research efforts of Igor Muratov have been focused on terrestrial (both pulmonate and operculate) molluscs of Central Asia, Caucasus, Jamaica, Comores, Laos, Philippines, as well as West and East Africa.

His general research interests have focused mainly on terrestrial pulmonates and include the analysis of populational variation, alpha taxonomy, analysis of fauna, ecology and zoogeography, functional morphology and phylogeny.

An essential part of his work has been directed towards building up scientific collections including extensive field work as well as curatorial collection updates.

Since his employment as Curator in 2008, Igor Muratov concentrated his research efforts on continental molluscan faunas of sub-Saharan Africa as well as on the revision of the molluscan types deposited in NMSA.